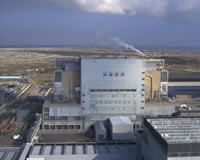 Dungeness A power station started generating electricity in 1965 and ceased generation at the end of 2006 after 40 years of supplying electricity to the national grid. Defueling of both Magnox reactors was completed in September 2012 with the spent fuel being dispatched to Sellafield for reprocessing. The site is now being decommissioned.

The area around the site is environmentally sensitive, designated as a Special Protection Area (SPA), a Special Area for Conservation (SAC) and a Site of Special Scientific Interest (SSSI).