Since giving permission for NNB Generation Company (HPC) Limited (NNB GenCo) to begin construction of the unit 1 nuclear island concrete raft in November 2018, ONR has maintained its regulatory oversight of the project as above ground structures are constructed and nuclear safety-significant systems and components are manufactured and installed.  We anticipate that our next permissioning point will be to allow NNB GenCo to begin the bulk installation of mechanical and electrical components in the unit 1 nuclear island. This represents the start of a key stage for the project involving at its peak round 4000 workers on the site.

Following a comprehensive review of the Hinkley Point C project, in September 2016 the Government announced its decision to proceed with the first new nuclear power station for a generation.  This followed EDF Energy's announcement of its final investment decision in July 2016.

In March 2017, ONR gave its consent for the start of nuclear safety-related construction.  This allowed NNB GenCo to begin placing structural concrete for the first nuclear safety-related structure on the site, the 'technical galleries'. These are a series of underground reinforced concrete structures mainly located beneath the site, connecting services such as cooling water and electricity.

Subsequent points at which ONR has given its permission for construction to proceed are:

ONR regulates construction and installation of plant via a permissioning regime which requires a licensee to demonstrate, amongst other things, that it is capable of ensuring that the as-constructed/installed plant complies with the extant safety case and applicable UK safety standards.

Our regulation will continue throughout the Hinkley Point C new build project, including giving permission for NNB GenCo to proceed to subsequent key stages of construction, installation and commissioning.

To this end ONR’s New Reactors Division has developed a regulatory strategy for Hinkley Point C with objectives of:

Drawing on this regulatory strategy, the New Reactor Division’s intervention plan looks ahead to the construction activities expected in the next year or so and is updated regularly. The plan is designed around the following themes: 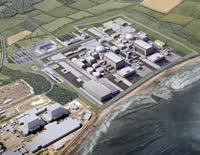