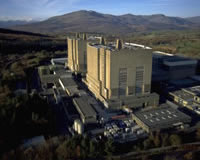 Trawsfynydd is a twin reactor decommissioning power station located on a 15.5 hectare site in Snowdonia National Park in Gwynedd, Wales. The plant, which became operational in 1965, was the only nuclear power station in the UK to be built inland.

Construction commenced in 1959, with both reactors operational by 1965. Generation ceased in 1991 and defueling was completed by 1997 with fuel elements removed from the site and transported to Sellafield for reprocessing.

The Care and Maintenance preparations phase of the decommissioning process is scheduled to be complete by 2030 following which the site will enter the Care and Maintenance (C&M) phase until final site clearance  in 2074, and delicensing in 2083. In 2020, the Nuclear Decommissioning Authority (NDA) announced plans to develop a continuous reactor decommissioning strategy with Trawsfynydd as the lead site and which is intended to bring forward the date when Trawsfynydd achieves final site clearance. The NDA are  in discussion with HM Government to pursue this.